Sora Kasugano is the main female protagonist and the twin sister of Haruka Kasugano.

Sora is a very beautiful white-skinned young girl who has a perfect, doll-like appearance and is often seen as a fragile and weak girl with long silver hair that is tied in twintails and gray eyes. Whenever she goes to school (or some other places) she often uses this twintail hairstyle. She usually unties her hair once at home. She is 152 cm tall and is often seen carrying a rabbit doll, which she received as a present from her mother before she and Haruka Kasugano left the village and which lends her a deceptively childlike character. She wears black ribbons for most of the Anime and Visual novel, but is shown to wear white ones when she was younger, and later on in Haruka no Sora.

Sora is a quiet, fragile and reclusive girl, fraternal twin sister to Haruka Kasugano. Yet beneath Sora's angelic doll like appearance lies a troublesome personality that is prone to withdrawn laziness and a rather severe lack of social graces. In episode 10, she becomes more considerate and caring towards Haruka after she decided to not trouble Haru too much and tries her best to take care of him. She seems to be very lonely when Haruka is not with her. Also she is very jealous when she sees Haru with another girl. In the manga she tends to be more helpful and caring towards Haruka, like cooking when he can not and she does not seem to spend too much time on internet. But, besides Haruka she seems to act friendly towards Akira Amatsume too.

The traumatic loss of their parents, Sora's deep bond with Haruka Kasugano and a kiss she shared with him as children causes her to fantasize about him. While she shields the extent of her feelings for him in public, she experiments with herself while fantasizing about being with him. She hates Nao Yorihime because of her relationship with Haruka and the fact that Nao raped Haru when they were young. Although she hates Nao, it was implied that they were once good friends.

At the end of her route, she wins Haru's affection by confessing her love to him and making love to him as he was caring for her when she had a fever. After they get caught making love by Nao and Kozue Kuranaga, he attempts to break off the relationship and she attempts suicide by drowning. Haruka tries to stop her but his inability to swim only causes the both of them to sink. Sora changes her mind upon hearing him whisper "save me" and she drags Haru to shore. Afterwards, they decide to travel to a far away country, they are travelling together, and they love each other and decide that they are the ones for each other, promising their friends to come back with souvenirs.

Sora and Akira on the Yosuga no Sora Visual Novel cover.

Sora in the train with Haruka.

Sora with her pajamas in Haruka bed. (Sora route) 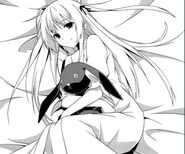 Sora with brother and parents

Sora and Haru confessing their love for each other. (Sora arc) (Anime)

Sora searching something on internet or writing

Sora in the train

Add a photo to this gallery
Retrieved from "https://yosuganosora.fandom.com/wiki/Sora_Kasugano?oldid=7728"
Community content is available under CC-BY-SA unless otherwise noted.