Kozue Kuranaga is one of Yosuga no Sora's side characters. She is the representative of Haruka Kasugano, Ryouhei Nakazato, Kazuha Migiwa and Akira Amatsume's class who is often nicknamed as "class rep." She fell in love at first sight when she saw Haruka due to his gentle profile and appearance.

Kozue has black hair and grey eyes. Her hair is sometimes in a ponytail and other times short pigtails. She is 158 cm tall. In the last episode of Yosuga no Sora and in Haruka na Sora, she leaves her hair untied, making her appear more feminine, this is due to the change in her life (in Japan, when a woman changes her hair it signifies the start of a new life, both in Haruka na Sora and in Yosuga no Sora/Sora's arc Kozue's life changes drastically). She is often seen wearing a hair pin on the left side of her hair. In her day-today, she often wears a white blouse and a brown skirt. When she goes to the beach, she wears a turquoise one-piece swimsuit.

Kozue is generally a shy and quiet person (a dandere) who is also very polite. Through her shy and responsible nature, she has a "delusion mode" where she imagines being in a romantic relationship with Haruka Kasugano due to her crush towards him (she is often teased by Ryouhei Nakazato due to that).

She dislikes the rural life and wants to move to the city when she becomes independent.

She is athletically-inept (at least to an extent), but is a very intellectual person, although, later on, she begins to realize that relying on rationality more than emotion is not always best.

Despite her shy, reclused and no-nonsense attitude, she is a very reliable and gentle person.

Representative of Haruka's class, a position of important functions and rights, Kozue has a strong sense of responsibility. Very diligent and responsible, she handles all of her work as a class rep (an example of this is shown in Episode 11) and will stay at school until evening to check if the windows and doors are locked.

In the first episode, when Kozue was leaving the school, Haruka Kasugano almost hit his bike with hers, he apologized and Kozue fell in love with him. In the same episode, the teacher says to Haruka to depend on Kozue, and he goes to get Sora Kasugano's printout of lessons with her, then, she asks about the person that was in the bike with him, (Sora) feeling relieved knowing that Sora is his sister, she runs and tumbles in Nao Yorihime.

In Sora's arc, she was the one to advise Haruka to not get too friendly with his sister in public, because his peers are noticing and spreading strange rumors. In the end of the same episode, she and Nao catch Haruka and Sora making love and, after staring in shock and disbelief, she runs off in tears. In Episode 12 she, trembling and crying, yells to Haruka out of anger and confusion that she loved him and that she will never talk to him again (which she later regrets saying). In the end of the episode, she appears with a different hairstyle due to the shock of recent events and wanting to move past everything. She later questions Nao, asking if, in love, feelings for one-another are the most important things, as she had never loved anyone before Haruka.

Kozue makes a little appearance when she asks Haruka Kasugano if he's feeling bad, saying that if he has any problems he can go talk to her about it, until Ryouhei Nakazato sneezes water at her and Kazuha Migiwa, after this they punch him.

Kozue makes a little appearance in her yukata while talking with Haruka Kasugano and Nao Yorihime.

Kozue makes a cameo with all the girls in one of the last pages.

Kozue makes a cameo and sees Haruka Kasugano cross-dressing along with everyone else.

Kozue goes to Haruka Kasugano's house to deliver notes for the next semester in the school along with Nao Yorihime, Haruka tries to shoo away them saying to Kozue that he will go to her house and deliver his seal (Due to Sora Kasugano being naked and having left signs of previously having had sex with him) but then, Sora shows up naked.

Sora Kasugano says to Kozue and Nao Yorihime that she did the same thing that Nao made to Haruka Kasugano, without knowing what that means, Kozue questions Sora, and she says that it's exactly what she's thinking, in shock, Kozue runs away.

In the same chapter, Kozue apologizes to Haruka explaining that Nao said that Sora disappeared, saying that it's her fault, after this she says "I'm uncertain about what is right and what is not but both Kasugano-kun and Sora-san are my important friends" and searches for Sora too.

She, along with Ryouhei and Kazuha, appears in the final asking Akira if she found Sora, Akira says that she is coming back quickly along with Haruka.

She goes to Haruka's house with everyone else. The next day, Kazuha receives an email from Haruka and read it to everyone, she cries when Haruka thanks them saying that they are just like a family and get angry with everyone for forgetting to say to her that Haruka is actually on a travel and that he will come back, Haruka asks via his email if she (and everyone else) wants a souvenir, Kozue says that she just wants them to come back safely. 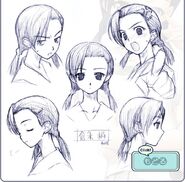 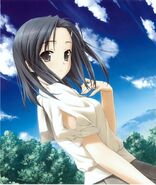 Kozue with her hair untied

Kozue in her kimono (Promotional Art 2) 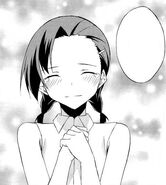 Kozue in the manga by Mikaze Takashi

Kozue seeing Haruka for the first time in the anime

Kozue in a scene in the anime
Community content is available under CC-BY-SA unless otherwise noted.
Advertisement