Kazuha Migiwa is one of Yosuga no Sora heroines. She is the stunning daughter of an influential magnate who lives a cultured life that some might compare to modern princesses.

Kazuha is a very beautiful young girl with long black hair that has square bangs, a white ribbon on the back side of her hair, dark blue eyes and a refined look that hides her gentle nature.

Kazuha is sharp-minded and attentive to every detail. As a result of her parent’s constant travels and long distance liaisons, she learned self-sufficient independence from a young age. Nonetheless Kazuha does not consider herself superior to others, with a modest nature that’s ever ready to take a subordinate role in teamwork and friendship. She often worries more about the others than herself. Through her temperance, she is a very kind and gentle girl.

Kazuha didn't have any friends in childhood because she was the daughter of the most influential person in the village, but this changed when she got to know a cute and innocent girl named Akira Amatsume. They often played together and the other kids joined them. Kazuha then made many friends. Even after Akira learned that Kazuha was an Ojou-sama, she didn't distance herself from her. But this happiness didn't last much longer: Akira's only parent passed away and she had to move away from the village. One night, Kazuha heard her father talking about adopting Akira, but her mother was against it and threatened that if he did, she would move away with Kazuha. Kazuha then revealed herself and cried, asking why. Her parents told her that Akira is Kazuha's father's daughter and that they are half sisters. After that, Mr. Migiwa decides to pay Yahiro Ifukube to take care of Akira, without Kazuha's knowledge.

Kazuha playing viola while Akira Amatsume listens to her

Kazuha in a yukata

Kazuha in a swimsuit 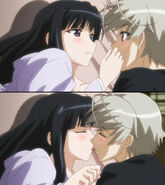 Kazuha and Haruka Kasugano French-kissing
Add a photo to this gallery
Retrieved from "https://yosuganosora.fandom.com/wiki/Kazuha_Migiwa?oldid=7746"
Community content is available under CC-BY-SA unless otherwise noted.