Haruka na Sora is the fandisc (extra content by the producers) of Yosuga no Sora, it contains the routes of Kozue, Yahiro and Sora (Sequel for her main route in the Visual Novel) plus short scenarios such as karaoke route and the characters introduction. The name of the routes are:

"I am in love with her even though she's a rigid chairman." (堅物な委員長だって恋するのです。) for Kozue,

"We are incompatible? (相性が悪い二人？) for Yahiro, 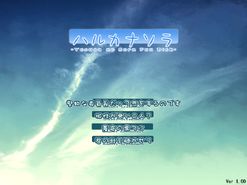 Menu of the routes. (From top to bottom: Kozue, Yahiro, Sora and karaoke routes.) 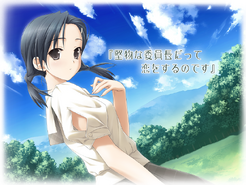 The beginning of Kozue route. (It's written: "I am in love with her even though she's a rigid chairman.") 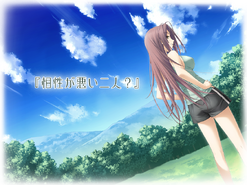 The beginning of Yahiro route. (It's written: "We are incompatible?") 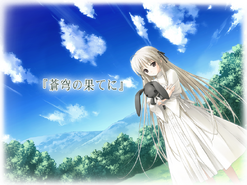 The beginning of Sora route. (It's written: "The end of Azure.") 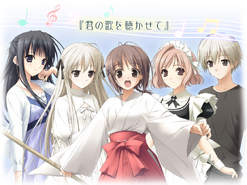 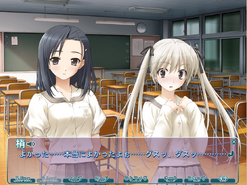 A dialogue in Kozue route. (In this dialogue Kozue is crying and saying: "I'm so happy... I'm so happy that you accepted me... Sniff, sniff..." After Sora allowed her relationship with Haruka.) 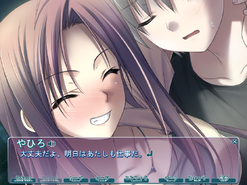 A dialogue in Yahiro route. (Before this dialogue, Haru was complaining: "I have school tomorrow, Yahiro-san..." and Yahiro is saying: "It's okay, I have to work tomorrow too.")
Add a photo to this gallery
Retrieved from "https://yosuganosora.fandom.com/wiki/Haruka_na_Sora?oldid=7647"
Community content is available under CC-BY-SA unless otherwise noted.